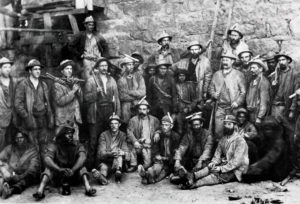 This website is currently under development and aims to provide resources to explore the migration of Cornish mineworkers, primarily in the century after 1815. This is the period commonly referred to as Cornwall’s Great Migration, during which time the Cornish dominated the global hard rock mining industry, giving rise to the ‘cult’ of Cousin Jack.

The Cornish are often statistically invisible, designated as English in official documentation. But the Cornish are not English, and this fact was finally confirmed in 2014 when the Cornish people were recognised and afforded protection by the UK Government under the Framework Convention for the Protection of National Minorities. My work, and that of other Cornish scholars, has sought to demonstrate the significant Cornish contribution to the British development of nineteenth century world mining resources.

Although recent postcolonial studies have begun to cast doubts on the prevalent triumphant and over-celebratory narratives of Cornwall’s role in the nineteenth century colonisation of nations across the globe (and this website does not shy away from discussing such issues), it is beyond question that the Great Migration has had a profound impact on modern Cornwall, and on many places around the world.

This website aims to tell the remarkable story of how a small nation from the south west corner of Britain aided the development of the modern global hard rock mining economy, and managed to dominate it for near a century.

It will include interactive maps showing many of the places to which they migrated. Some of the most important or less well known destinations will have detailed illustrated histories. There is also a searchable database of over 3,000 Cornish mineworkers who migrated to Latin America, which has been painstakingly compiled from countless sources during 25 years of research.

Being Cornish born and bred, and having many hundreds of ancestors on both sides of my family tree who contributed to the movement of mining families to and from Cornwall, I have amassed a lot of information on this period. I feel strongly that we should all share in the dissemination of information concerning this important chapter of our nation’s history. It is a heritage that belongs to One and All.

I very much hope that you too will contribute to the update of content on this website through the submission of information about the migration of Cornish miners, and by sharing any photographs, plans, maps, letters or diaries you might have.

In the meanwhile you are are welcome to look at the history of Cornish mining migration or explore some of the places where the Cornish went. You can also register as a subscriber to get updates and contribute to this website here

Bringing the Past back to Life   Excited to have been trying out some new functions on the My Heritage website.  One function allows for the colourisation and enhancement of old Black and White photographs.  But one of the newest functions (Deep Nostalgia) allows the animation of an uploaded photograph. The software recognises faces… Read More »Animate the Past

Online Kresen Kernow Talk Join me at a Kresen Kernow talk to discover how the Cornish came to dominate the global metalliferous mining industry for over a century. Inspired by Kresen Kernow’s (closed) exhibition focusing on Cornwall at Home…and Away, Sharron will explore the history of Cornish miners and their role in a global industry.… Read More »Kresen Kernow Talk